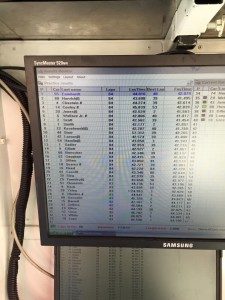 Auto Club Speedway, Fontana CA – Jeffrey Earnhardt received the call to replace team owner Jamie Dick behind the wheel of the #55 Viva Auto Group Chevrolet after Dick received medical news of his diagnosis with diabetes. “Hearing about Jamie’s condition was terrible. He’s been very good to me and to have someone as nice as him having to get that news stopped me in my tracks” said Earnhardt. “I’m happy he asked me to come out and drive but my thoughts are on his health.”

Jeffrey flew out as soon as he received word and the team made the changes necessary to get Earnhardt in the drivers seat. Starting from the 27th position, it wasn’t long before the #55 maneuvered through the competition and was demonstrating that even on short notice driver & team were ready to compete. “The guys did a great job setting up the car and after we made some adjustments we found ourselves running in the top 15. As we saw the speeds picking up we decided to stay out and had the #55 leading the race for 3 laps” commented Jeffrey. “Our lap times were strong and if we didn’t have the power issue I’m pretty sure we would have finished with a top 10.”

That power issue ended up being a battery failure that required a long stop that sent the Viva Autogroup AutogroupChevrolet into a prolonged repair and 4 laps down. Once repaired, Earnhardt didn’t yield another lap and remained competitive with the race leader times. Jeffrey said, “these things happen. It’s a shame it happened on a day when we were clearly competitive but that’s racing. Hopefully we’ll have more days with strong runs and the breaks will be in our favor.”

Jeffrey is working with Jamie to plan more races this season and will have news on the next race with Earnhardt piloting the #55 soon.

Our thoughts and prayers are with Jamie Dick for his quick recovery.

« Early Setback For Earnhardt At Atlanta
Top Fifteen At Bristol »
info@jeffreyearnhardt.com
Like Us On Follow Us On