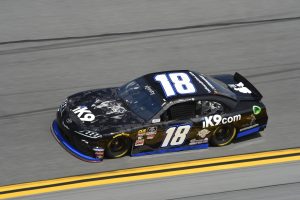 Jeffrey Earnhardt, driver of the No. 18 iK9 Toyota Supra for Joe Gibbs Racing:

“This was the first time to actually get to race up front like that. It was a lot of fun. I think we’ll be really good for the rest of the superspeedways. I can’t thank iK9, Xtreme Concepts and all guys at Gibbs. They really have welcomed me with open arms – Toyota and all of the support that they’ve given me already. Hopefully, we continue to grow this program and I grow as a driver. We won’t let them get away from us anymore. We didn’t lead enough. We didn’t lead the last one and that’s the most important one. We made adjustments because I felt like I was complaining about it being too free, and we ended up getting it too tight there and we just struggled a little bit after that. Man, I was getting my butt kicked on everyone side drafting. Just lack of experience. I’ll get better at it.”

The next event on the Xfinity Series schedule is the Rinnai 250 on Saturday, Feb. 23 at Atlanta Motor Speedway. The race starts at 2 p.m. EST with live coverage provided by FS1.​