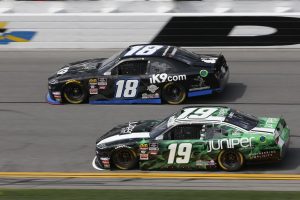 What can we expect from the iK9 team this weekend at Atlanta after a positive debut last Saturday at Daytona?

“Going into Atlanta, I feel like we’re going to be even better than we were last weekend. The Gibbs cars ran well in Atlanta last year, but it’s a track where the quality of your equipment really shows and it’s more about the driver than compared to Daytona, which can be a wildcard. When we started to prepare for this season, we didn’t really focus on Daytona, and then we went down there and ran well. We’ve been putting all of our focus into Atlanta from the very start of this and we all feel really good about what we’ve got planned for the iK9 Toyota Supra this weekend.”

You put on a great show in the first race of the year at Daytona and it was also your first race with a new team. How does it feel to know you are doing exactly what you set out to do?

“There were a lot of highs for us in Daytona. We went out and did what I knew we would be able to do, and that was lead laps and run up front. It was a great way to kick off the season and Daytona is a special place for me personally, so that makes it just a little sweeter. From qualifying on the front row to earning those extra points in the first two stages, I really feel this is just the beginning of what will turn out to be the best season I’ve had in a long time. As I said, we’ve been working on our Atlanta preparation for a few months now, so it shouldn’t be a surprise to anyone when we go out and do the same this weekend. I’m looking forward to adding a few more things to the list of career firsts and career highs by the time we leave Georgia.”

Daytona and Atlanta are very different, not only in track size but in the way you race at each. What will be the biggest difference for you and Jeffrey heading into the second race of the season?

“Daytona overall was a positive for us, but Atlanta will be quite a difference as far as communication during practice and the race. There’s a lot more going on. You’re not wide open all the way around and you’re not at the mercy of who is pushing you or who is in front of you. Atlanta is a lot more handling focused and Jeffrey is going to be out there by himself to where he controls his own destiny with the feedback he gives to us. We’ve done a lot of work on that communication ahead of time so that when we arrive there is already a comfortability level and we’re able to give him the adjustments he needs to keep the iK9 Toyota Supra up front.”