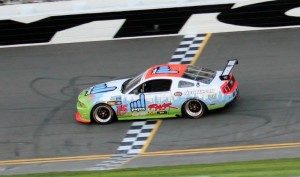 January 28, 2012– The 50th running of the Rolex 24 at Daytona had all of the excitement one would expect during a golden anniversary event. The #15 Poynt/Fastwax.com Mustang packed the power necessary to compete with the best of the GT class but after several hours of competition a mechanical issue sent the team home early. After the race Jeffrey commented, “It was disappointing but there were a lot of bright spots during the laps completed. It’s a new car so you never know what might happen. I had some good laps and the rest of the team seemed to get a rhythm during their sessions. Rick (Rick Ware Racing) knows what needs to be adjusted and he began working on it the day it returned to the shop.”

The next Grand AM race is the PORSCHE 250 on March 31st at Barber Motorsports Park. The race will be televised on SPEED TV at 4pm and Jeffrey & team will be ready for competition!