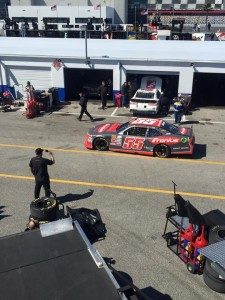 Daytona, FL – Daytona International Speedway had many firsts during this weekends inaugural Xfinity Series Alert Today Florida 300 race. It was the debut for Xfinity as Series title sponsor, the first race for driver Jeffrey Earnhardt with his new team Viva Motorsports and the beginning of a promising partnership with new sponsor, Fronius USA. Saturdays activities began with Jeffrey qualifying in the 13th position and starting in row 7 for the days race. Immediately after the green flag waived Jeffrey knew he was piloting something special with the Fronius #55 Chevrolet. “i knew Jamie and the Viva Motorsports team were working hard to put me in a good car but the Fronius 55 exceeded my expectations” said Earnhardt. “We were able to keep up with the top teams and the car gave me confidence we could compete with anyone out there.”

On a day when the yellow flag remained under wraps for the majority of the race, pit stops were critical to the teams success. “The race stayed green for a lot longer than expected in Daytona so our pits were going to be key to staying in the mix. When we came in to pit the #18 car stopped in our box and almost ran over our jackman” stated Jeffrey. “I’m glad he was able to avoid getting run over but it hurt our momentum and made it difficult to recover without more cautions. We finished with a top 20 (16th) which is good considering the late wreck and I’m happy we completed the race with most of the race car. I can’t thank our sponsor Fronius enough and I’m looking forward to Atlanta to give the Fronius car another run.”

Jeffrey’s next race will be the Hisense 250 at Atlanta Motor Speedway this Saturday, February 28th at 1:30pm ET. The race will be televised on Fox Sports 1 and broadcast on Sirius Channel 90.

« Jeffrey Earnhardt Moves To Viva Motorsports
Early Setback For Earnhardt At Atlanta »
info@jeffreyearnhardt.com
Like Us On Follow Us On