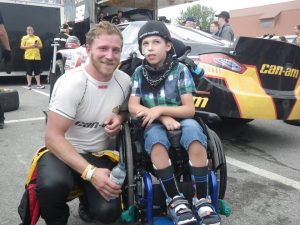 Trois-Rivieres, Quebec: Jeffrey Earnhardt crossed the northern border to compete in the NASCAR Pinty’s Canadian Series on August 14th. Piloting the #36 Can-Am Kappa Ford, Earnhardt was driving on the oldest street course in North America at the Grand Prix de Trois-Rivieres. The field of experienced road racers proved to challenge Jeffrey throughout the weekend. Practice and qualifying was a learning experience and the opportunity to get a feel for the car, competition and course. “I love the chance to come here with our sponsors and do something different but I’d be lying to say it’s easy to jump into an unfamiliar car with an unfamiliar team and run a difficult course like this with all of these street course regulars” said Jeffrey. “We had a major mechanical during practice but the crew was amazing and had repairs done in impressive time. We qualified 18th but everyone knew we’d perform better once the green flag dropped.”

And perform better is exactly what the #36 team did that day. The action started fast & furious with a caution on the first lap and several more served up during the day. Earnhardt made a strategic pit that enabled him to stay on course and fight his way through the field. By lap 33 he was running in 8th and moving forward. “We had some wild action going on later in the race. People were bumping and racing aggressively and I was giving it all I had to gain position. Somewhere around 11 to go we were in 5th and for several laps a group of cars were hammering away trying to pass. My tires were shot and eventually I couldn’t hold position but we finished the day 7th and gave the fans a good race.”

« Jeffrey Earnhardt to make Canadian NASCAR series debut this weekend
JEFFREY EARNHARDT on Race Hub | August 16, 2016 »
info@jeffreyearnhardt.com
Like Us On Follow Us On