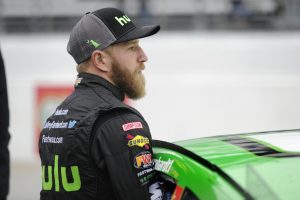 Phoenix, AZ-  Monster Energy NASCAR Cup Series driver Jeffrey Earnhardt heads to Phoenix International Raceway this Sunday driving his familiar Hulu green number 33 Chevrolet.  The 2017 season is winding down with just two races left on the schedule and Earnhardt is eager as ever to hit the track.  “This season has been a roller coaster” said Earnhardt.  “I joined Joe and Curtis just weeks before the Daytona 500 and with hard work and some great support from Hulu we were able to complete the season and have some decent runs in the process.  This was a year of setting the table.  We made a commitment to build this program together and I think we have a lot to be proud of as we finish the last two races of 2017.”
Hulu has had a banner year winning Emmy’s and launching live tv on the go in addition to entering NASCAR’s premiere league and sharing Jeffrey & the Circle Sport story in “The Driver with Jeffrey Earnhardt.”  “Hulu has been a dream partner” said Nikko Lavey, VP of JEI.  “In a very short period of time we fielded a significant NASCAR program, filmed & released a legit multi-episode series, created a great virtual reality app that puts fans behind the wheel of a race car with Jeffrey and made Hulu a household name to the tens of millions of NASCAR fans that love Earnhardt racing.”  Hulu’s green 33 car is one of the most visible on the track each week and fans have made it clear that they want to see Jeffrey continue the legacy of Earnhardts in NASCAR.  “I will miss seeing my uncle on the track each week just like all of the other fans but I’m ready to do my best to earn their support” said Jeffrey.  “ I’m going to work extra hard to make sure Earnhardt fans have someone to cheer for next year and everyone on our team understands the efforts required to get to the next level.”
The green flag drops at 2:30pm ET this Sunday and people can watch the race on Hulu on NBC.  Download the Hulu app and get 33 days free at hulu.com/start/go33.
« Earnhardt to Return to 33 in 2018
33 Team Ownership Splits »
info@jeffreyearnhardt.com
Like Us On Follow Us On