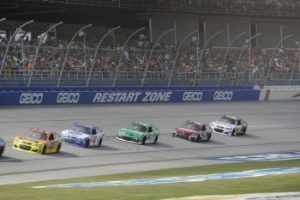 Talladega, AL – Circle Sport team owner Joe Falk and Monster Energy NASCAR Cup Series driver Jeffrey Earnhardt made the announcement this Sunday at Talladega Superspeedway that Earnhardt would be returning to the number 33 Chevrolet next season to continue the partnership that began in 2017.  Earnhardt competed in the majority of races for Circle Sport-TMG this year and is excited to have the opportunity to return and build on the foundation.

“Joe and I knew we’d have a year of development when we signed our deal just a few weeks before the Daytona 500 this year” said Earnhardt.  “It was definitely challenging but we found some great partners in Hulu and the future looks bright.  I’m relieved to not have to start all over again at another team and be able to continue my friendship and business relationship with Joe, Curtis and the CSTMG crew.”  Circle Sport has made some great strides with equipment and personnel and is thrilled to have the only Earnhardt competing in NASCAR next year.  “Jeffrey has demonstrated a willingness to learn and become part of the team and I’m glad we get a chance to have a full offseason to make improvements to our program together” said CS owner Joe Falk.  “He and I are similar and we both have a competitive fire.  The fact that he’ll be the only Earnhardt driving in NASCAR next season puts some added pressure on us to perform and we’re gonna give the Earnhardt fan base someone to cheer for.”

Dale Earnhardt Jr. announced his retirement at seasons end after reigning as the sports most popular driver for the past 14 years.  Jeffrey is proud of his uncle and welcomes the opportunity to earn the support of the largest fan base in the sport.  “My grandfather was one of the best champions in the history of NASCAR.  My uncle has been a fan favorite since I can remember.  I believe if I continue to work hard and we deliver results on the track the people will appreciate that and I’ll have a chance to earn their support and respect” said Jeffrey.