JD Motorsports with Gary Keller is pleased to announce that Jeffrey Earnhardt will return to compete full time in the 2021 NASCAR Xfinity Series season as pilot of the No. 0 Chevrolet Camaro. 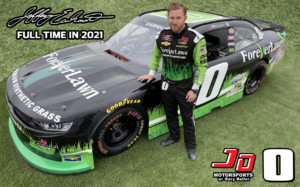 Earnhardt competed in 29 races last season enjoying thirteen Top 20 finishes, with five of those in the Top 15.  What began as an agreement to run a handful of races quickly became a synergy that team & driver wanted to continue.

“We got a late start and the plan was to run six to twelve races but something good was happening and by Bristol you could sense the momentum we were having” said Jeffrey.  “We came home in 15th in our third race and that’s an accomplishment when just a few weeks earlier we had no plans to work together.  We had great partners join us and the season had some real bright spots to build on.”

Last season, Jeffrey’s best outings were finishes of 12th at Texas and an impressive 11th place on the Charlotte Roval in heavy downpour conditions. This season, his goal is to compete for Top 10 finishes on a weekly basis.

The team, headed by co-owners Johnny Davis and Gary Keller, experienced one of its best seasons to date in 2020, and continues to show growth year after year.

The upcoming season has new challenges and much higher goals for the fourth-generation driver from the most famous family in racing.  “We are all aware we are underdogs” commented Jeffrey.  “We’re prepared for the hard work it will take to make the playoffs and with additional sponsorship I think we’ll turn some heads.  I’m really excited to return to the No. 0 and look forward to working with Johnny to give the fans a ‘blue collar’ team to cheer for.”

Further sponsorship announcements for Jeffrey Earnhardt will be made at a later date, along with more driver announcements to complete the JDM lineup.

The 2021 NASCAR Xfinity Series season kicks off at Daytona International Speedway on February 13th. To keep up with Jeffrey Earnhardt, follow his social media pages @JEarnhardt1, and visit his official website at www.JeffreyEarnhardt.com.  For all things JDM, follow along on our social media pages @JDMotorsports01, and visit the team’s official website at www.TeamJDMotorsports.com. #TeamJDM

« 2020 Closer at Phoenix Will See Earnhardt in Contec Blue
The Story Behind Jeffrey Earnhardt’s Helmet Tribute to Dale Sr. »
info@jeffreyearnhardt.com
Like Us On Follow Us On