Mooresville, NC – As the 2021 season comes to a close at Phoenix Raceway this Saturday, it will mark an end to Jeffrey Earnhardt’s time with race team Johnny Davis Motorsports with Gary Keller.  “I want to thank Johnny, Gary, Tony and the team at JDM” said Earnhardt.  “They’re a good bunch of people and I wish them success in the future.”

Jeffrey Earnhardt returned to JDM in 2020 with a plan to run a handful of races.  As the season progressed the sponsors gained interest in working with the 4th generation Earnhardt driver and soon Jeffrey found himself racing most of the season.  In 2021 he ran full time and grew his partnership with ForeverLawn and several other sponsor partners.  “The folks at ForeverLawn became close personal friends of mine and together we realized some great success on the business and relationship side of things” commented Jeffrey.  “You always want your sponsors to see tangible results from a partnership and this has been a good season for ForeverLawns dealers.” 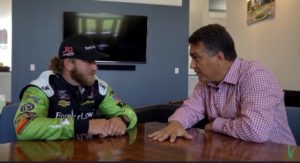 Earnhardt heads into 2022 with a plan to find a race winning capable ride.  “My team is working hard to grow our own sponsor base so we can drive for victories.  The most enjoyable experience I’ve had is the 7 races at Joe Gibbs Racing because I could lead races, compete for top 5 & 10 finishes and have a chance to win.” Earnhardt had 3 top 10 finishes while at JGR with a best p3 in Charlotte during the 7 race campaign. “Next season we hope to run full time but it will be based on funding.  If for some reason we’re short funds I’m going to shoot for quality rather than quantity so I can demonstrate my abilities and give my fans something to be excited about. We’re speaking with teams that can win races and hoping to have plans finalized over the next month.”

The NASCAR Xfinity race in Phoenix begins at 8:30 pm EST and will air on NBCSN.

« Absorka and Sparks to Sponsor Earnhardt At Dega
Earnhardt Featured in Natural Motion’s CSR Racing »
info@jeffreyearnhardt.com
Like Us On Follow Us On