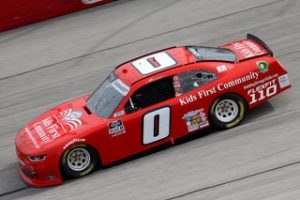 21 May 2020 – Darlington, SC.   Xfinity Series Racing returned to action at the Darlington Speedway and an Earnhardt driver was making his season debut for Johnny Davis Motorsports with Gary Keller in the Kids First Community – Flexfit #0 Chevrolet.  It had been eleven months since Jeffrey last drove in the NASCAR ranks but his calm demeanor and steady hand showed no signs of rust.  “I was definitely eager to get back on track and I think all the drivers were in the same boat” said Earnhardt.  “I had a little more layoff than most but I keep fit and use my VRX Simulator to stay prepared so I was confident once the green flag dropped that I would settle in quick.”
Qualifying was negated due to NASCAR’s Covid protocols so Earnhardt started in the 34th position.  It didn’t take long for Jeffrey to navigate his way thru traffic and within a short series of laps Earnhardt was moving forward.  “No question it took a few laps to get comfortable but as I learned what to expect from the competition we were able to make a plan to pick off some drivers” commented Jeffrey.  “We came home with a 23rd place finish and I think we could have gained a few more but it was a good start for a new driver & team.  I think we’re going to beat the guys we’re supposed to and turn a few heads during this season.”
Earnhardt’s next race is this Memorial Day at Charlotte Motor Speedway.
« Earnhardt To Make 2020 Debut
Charlotte Recap »
info@jeffreyearnhardt.com
Like Us On Follow Us On