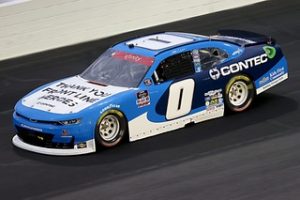 25 May 2020 – Concord, NC.  Jeffrey Earnhardt returned to NASCAR Xfinity Series action this Memorial Day Monday and it was certainly a race Earnhardt and NASCAR fans will not forget anytime soon.  The evening began with the Contec #0 Chevrolet in a starting position of 23rd in a field of 37 cars.  The weather was ideal for racing and Earnhardt was eager to give his new sponsor a return on their investment.  Little did Jeffrey know that a rogue jack was going to steal the show and put his Contec car on the Today Show, Barstool Sports, and countless other news outlets as it took its own lap around Charlotte Motor Speedway.  “The jack getting stuck under the car was certainly the difference between a good finish and where we ended up” said Earnhardt.  “Based on our lap times we could have competed for 12th or better, but I’m not going to get mad at anyone.  We’re a team and stuff happens that we just have to work through.  Even though the problem put us back several laps we continued to race and by the time the checkered flew we picked up 13 spots I think, so we fought back as best we could.  I wanted the good folks at Contec to get good air time but I don’t think any of us anticipated that much exposure and definitely not for that reason, haha.”
Jeffrey and JD Motorsports with Gary Keller are working on additional sponsorship to increase Earnhardt’s races this season and with continued efforts from all, the expectation is that fans are going to see a lot more of Jeffrey in 2020.  His next race is to be announced shortly.
« Darlington Recap
JEFFREY EARNHARDT RETURNS TO BRISTOL »
info@jeffreyearnhardt.com
Like Us On Follow Us On