Bristol, TN (April 23, 2017) – Jeffrey Earnhardt will be racing in today’s Food City 500 at Bristol Motor Speedway in the Superior Logistics number 33 Chevrolet.  The Monster Energy NASCAR Cup Series driver has had some tough breaks during the early part of the 2017 season but looks forward to cleaning the slate and getting the program turned around at the worlds fastest half mile. 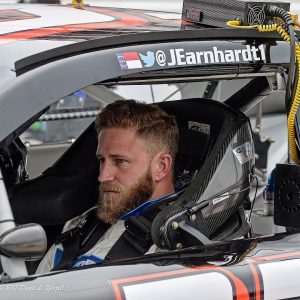 “When we were running top 10 at the Daytona 500 I was feeling real confident and all of us were in a positive mindset.  We’ve had some mechanical issues and some wrecks that hurt that confidence and now it’s time to pick it up and get back on track” said Jeffrey.  “It’s still early in the year and we have good people on our team so it’s just a matter of focus and determination and we’ll start seeing better finishes.”

This will be the first Monster Energy NASCAR Cup Series race with four Earnhardt’s at the starting grid.  Jeffrey had this to say about the unique circumstances at Bristol today, “I knew Dale Jr. would be out there with me but my dad and Aunt Kelley are doing the start your engines thing so it’s really cool.”  Kerry Earnhardt and Kelley Earnhardt Miller will be instructing drivers to start their engines to begin today’s race.

The weekend forecast is calling for significant rain so delays are probable.  Scheduled start is 2pm ET with Fox broadcasting today’s race.  The Performance Racing Network (PRN) and Sirius/XM Radio will call the race on radio.

« The Earnhardt Way
As Dale Earnhardt Jr. begins retirement tour in Richmond, nephew Jeffrey Earnhardt looks to NASCAR future »
info@jeffreyearnhardt.com
Like Us On Follow Us On