May 22, 2017. Charlotte NC – NASCAR’s Speedweek is in full swing both on track and in town.  Towne Bank was the title sponsor of Jeffrey’s #33 Chevrolet during Saturdays Monster Energy Open and the younger Earnhardt posted a 14th place finish after starting in the 21st position.  “It was pretty cool getting the car dialed in and while we knew we need more horsepower to compete we were able to stay on the lead lap and finish 7 spots better than we started” commented Jeffrey.  The team has been running with limited resources as a result of the late drivers arrangement but it’s certainly not deterring driver or team.  “We knew going into the season that it would be a work in progress.  No question it’s taking patience and perseverance but we made it to Cup and now we’re going to build long term sponsor partners and get into a position to compete for wins.  Starter, Towne Bank, Superior Logistics, all of these sponsors are seeing how hard we work and they’ve been outstanding to our team.  We have some exciting news in the works that will help our progress.  Each time we gain a new sponsor we put everything into the program.  I can assure you that by the end of the season we’ll be much better off than the start.  And I look forward to demonstrating the results of everyone’s hard work” said Jeffrey.

Next up is the Coca Cola 600 at Charlotte Motor Speedway.  Earnhardt looks to continue his push forward and team owner Joe Falk is doing everything he can to ensure progress.  “Jeffrey and I cut our deal very close to the beginning of the 2017 season so there wasn’t time for sponsor development or much of a sales effort.  We were scrambling just to get the basics done.  Now we’re getting into a rhythm and we’re getting a fair amount of interest from mid and large size sponsors.  We’re confident this is going to grow and I’m proud of Jeffrey and the team for sticking it out during a challenging start” said Falk. 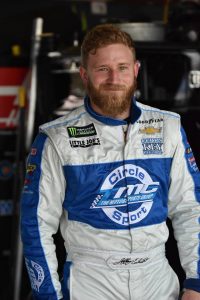 Big news is on the horizon but first stop is this Sunday for the Coca Cola 600 airing on Fox.  You can also meet Jeffrey at the Autograph Zone at Speed Street this year on Friday May 26th between the hours of 6-7pm.

« As Dale Earnhardt Jr. begins retirement tour in Richmond, nephew Jeffrey Earnhardt looks to NASCAR future
Earnhardt and Hulu Partner for 2017 »
info@jeffreyearnhardt.com
Like Us On Follow Us On