Martinsville, VA – The JD Motorsports with Gary Keller race team took some lumps at Martinsville Speedway during the NASCAR Xfinity Series Cookout 250 this weekend.  The number 0 KSDT CPA Chevrolet Camaro driven by Jeffrey Earnhardt earned stage points when the initial green & white checkered flew but equipment failure later in the race ended what was proving to be a solid performance by driver & team. 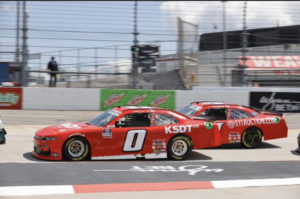 “I felt like we were finding speed on the longer runs and it was good to get stage points” commented Earnhardt.  “Our team is having good synergy and if we can eliminate the snake bites we can get on track to climb the standings.”

Next stop is Talladega for some super speedway racing.  The Ag-Pro 300 fires off on Saturday April 24th at 4pm ET and will be televised on Fox.

« West Coast Swing Nets Two Top 20s for Earnhardt.
Olympic Tribute for Earnhardt at Darlington »
info@jeffreyearnhardt.com
Like Us On Follow Us On