(MADISON, N.C.) — MIDNIGHT MOON – the award-winning moonshine inspired by the family recipe of legendary bootlegger and NASCAR Hall of Famer Junior Johnson – is proud to announce its new partnership with Jeffrey Earnhardt, NASCAR driver and grandson of Dale Earnhardt Sr.

Earnhardt will team up with Midnight Moon as an official brand ambassador, continuing the brand’s celebration of Johnson’s bootlegging driving skills that led him to become one of the godfathers of NASCAR.

“I’m really excited to be teaming up with Midnight Moon Moonshine,” Jeffrey said. “They have Junior Johnson’s legacy in their DNA and simply stated, they make the best moonshine in the country.” Hecontinued, “I look forward to spending time with the Midnight Moon family and sharing the ‘shine with fans around the country. This is gonna be a fun partnership.” 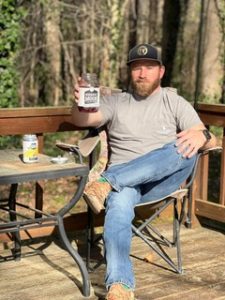 “We couldn’t think of a better partner to support our Midnight Moon line of moonshines,” said Joe Michalek,Founder of Piedmont Distillers. We are excited about working with Jefferey because he respects the path paved by his grandfather, but is driven to make his own way.” Michalek continues, “He embodies the same‘old-school racer’ values shared by Dale Sr. and Junior…he’s a real, down-to-earth guy with a passion for racing and all things Americana at his core. These shared values are the heart and soul of Midnight Moon and we are thrilled to have Jeffrey on board to continue building our community.”

Earnhardt will promote Midnight Moon’s family of authentic, handcrafted moonshines to the next generation of race fans and he’s super excited about the new ready-to-drink moonshine canned cocktails and 1.75 liter “Party In a Box” size. These new innovations make it easy to enjoy and share Midnight Moon at your next tailgate or wherever your next outdoor adventure takes you.

Introduced by North Carolina’s first legal distillery in 2007, Midnight Moon has spent the last 15 years sharing Southern moonshine traditions and celebrating the legacy of The Last American Hero – Junior Johnson. Midnight Moon has stayed true to the tradition of handcrafting it’s small- batch moonshine with all-natural,100% real ingredients. The brand likes to say, “We have spent the last 14 years handcrafting spirits before “craft” became cool.” For more information visit: midnightmoonmoonshine.com or get social on Instagram, Facebook, Twitter, and TikTok at @midnightmoonusa.

Jeffrey Earnhardt is a 4th generation NASCAR driver from the legendary Earnhardt family of racing.Earnhardt has competed in the NASCAR Truck, Xfinity, Cup and Euro series as well as the Rolex 24 hours at Daytona. Jeffrey currently competes in the NASCAR Xfinity Series. For more information visit Jeffreyearnhardt.com or follow on social media at @Jearnhardt1 and Facebook/Jeffrey Earnhardt.

« Jeffrey Earnhardt to drive the #35 Dalstrong Toyota Supra for Emerling-Gase Motorsports at Phoenix Raceway
Jeffrey Earnhardt Joins Richard Childress Racing for NASCAR Xfinity Series Race at Talladega »
info@jeffreyearnhardt.com
Like Us On Follow Us On