JD Motorsports with Gary Keller (JDM) is pleased to announce the return of Jeffrey Earnhardt to the driver lineup for the 2020 NASCAR Xfinity Series (NXS) season. The grandson of legendary driver and NASCAR Hall of Fame member Dale Earnhardt reunites with JDM after running a full season with the team in 2014. 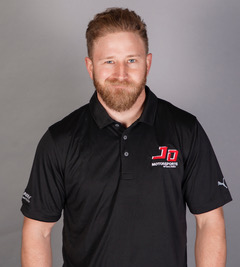 Last season, Jeffrey Earnhardt proved that he is capable of running with the best, notching one Top 5 and three Top 10 finishes in just seven starts. With more races on his plate this season, he is expected to continue to shine on track.

JDM & Earnhardt have twelve races on the schedule and are working on additional sponsorship to increase his opportunities to compete this season.

The North Carolina native is eager to return behind the wheel, saying this: “I am really thankful to Johnny Davis and the JD Motorsports with Gary Keller team for having me onboard this season. These guys work hard every week and they’ve demonstrated the ability and desire to compete. I am looking forward to getting back on track this season!”

Earnhardt’s car number will be announced at a later date, along with sponsor information. Stay tuned to our social media channels for more information regarding this season’s latest news.

Though the NASCAR Xfinity Series season kicks off from Daytona International Speedway on Saturday, February 15th, Jeffrey Earnhardt’s season kicks off at Atlanta Motor Speedway on Saturday, March 14th. To keep up with Jeffrey Earnhardt as he prepares for the start of the season, follow along on his social media pages @JEarnhardt1 on Facebook, Twitter, and Instagram. For all things JDM, follow along on our social media pages @JDMotorsports01. #TeamJDM

« Earnhardt Focused on Racing for Championship in 2020
Flexfit to Sponsor Jeffrey Earnhardt and JD Motorsports with Gary Keller »
info@jeffreyearnhardt.com
Like Us On Follow Us On