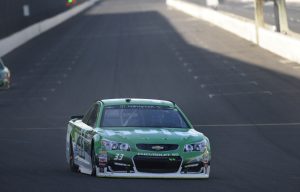 Indianapolis- Jeffrey Earnhardt headed to Indianapolis Motor Speedway with the number 33 Hulu Chevrolet packing an ECR power plant.  The green machine looked great and the team was fortunate to have multiple Hulu guests in attendance.  “I love it when the sponsors join us at the track” said Earnhardt.  “Especially the people from Hulu.  They’ve become part of our family and it motivates me even more when I know they’re here supporting me in person.”  The weekend started with some mechanical challenges that saw the #33 car under repair after just three practice laps.  The team worked at a workmans pace to remedy the problems and had Earnhardt back in the seat for second practice and qualifying.  There were bugs to be worked out and it wasn’t an ideal beginning to race weekend but after qualifying 36th Jeffrey was confident there was more to the car than the pre-race results delivered.
“I knew the guys busted their backs fixing the problems and I definitely wanted to run more practice laps but we’re a work in progress and fortunately Eddie had things under control and kept me focused on race day” commented Jeffrey.  When the green flag dropped Earnhardt immediately began moving up in the field but Mother Nature had a different plan and the red flag dropped due to rain.  Later that afternoon the race restarted and for the next few hours aggressive racing ended many of the competitors day early.  “It was a fast paced race and guys were making aggressive moves trying to gain position.  We got jammed up a bit when I came up on a wreck but fortunately the damage was something the guys could fix and keep us on the track.  We ended under caution with a P26 finish and probably would have had a top 20 if the race went the extra lap but I’m pleased we made progress during the race and now look to build on that performance.”
Next stop for Earnhardt and team is the Overton’s 400 on Sunday July 30th at Pocono Raceway.  The race will be televised on NBCSN and can be streamed live on Hulu.
« Earnhardt Returns to 33 car at Daytona
The Hulu Earnhardt 33 Day Free Trial »
info@jeffreyearnhardt.com
Like Us On Follow Us On