email
Talladega – Jeffrey Earnhardt pulled his first ever NASCAR double duty this past weekend at Talladega Superspeedway.  Earnhardt piloted the Joe Gibbs Racing number 18 IK9 Toyota Supra in Saturday’s Xfinity Series and drove the Xtreme Concepts Inc Racing number 81 IK9 Toyota Camry in the Monster Energy NASCAR Cup Series on Sunday.  The gravity of the opportunity was apparent by Jeffrey’s focus throughout race weekend.  “This is such an excellent chance to race two times at IK9’s home track and at a place where my grandpa and uncle have had so much success” said the new face of Earnhardt Nation.  “This is what I’ve worked so hard for over the past several years and I’m going to maximize this opportunity and give the fans something to cheer about.”  Earnhardt did not disappoint. 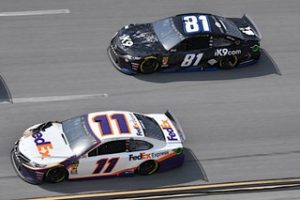 Jeffrey finished 26th after starting 7th in Saturday’s Money Lion 300 due to a late race wreck that broke the front suspension beyond repair but that’s after racing his way to the front and challenging competitors for the lead.  “It felt great to bring the IK9 Supra to the front and I knew we could win that one but the cars were jumping out of line and as I was making my way back to the front I got side drafted and the rear end got loose which ended our day” commented Jeffrey.  As Earnhardt challenged for the lead the roar from the crowd was impressive.  But Sunday’s enthusiasm was downright electric!
Earnhardt’s second race of the weekend was the Geico 500 in the first ever, Xtreme Concepts Inc Racing MENCS competition.  “Having a second go at it on Sunday helped ease the tough break on Saturday” said Jeffrey.  “We had such a good run going in the 18 car and I thought we could win.  I was optimistic about Sunday but as we headed to the final laps, I’m not gonna lie, I was like damn, we’re in a great spot here.”  Jeffrey was racing to the front in the heart of Earnhardt country and it’s safe to say there wasn’t an occupied seat as the crowd stood and cheered the 4th generation Earnhardt driver.  “We saw him make his way into the top 10 and then start moving up” said Paul Baukus of JEI.  “It was insane.  I don’t know if it was Dave Moody or one of the other MRN announcers but when Jeffrey came towards the front and the announcer said “here comes Earnhardt up the outside” the fans went crazy.  It was a great moment and that enthusiasm was incredible.”
With just one lap remaining in the race the IK9 Camry was caught up in carnage from other cars wrecking and compromised an otherwise stellar performance by Earnhardt.  “This was a great race and I’m so glad we had a chance to bring the fans to their feet with some excitement” said Earnhardt.  “I’m going to do everything I can to make sure we get to victory lane this season and get some real celebrations started.”
« Jeffrey Earnhardt takes Fox Sports to IK9
Earnhardt Back in #18 iK9 Toyota Supra at Charlotte »
info@jeffreyearnhardt.com
Like Us On Follow Us On