Daytona, FL (Feb 27, 2017)- History was made during the 59th running of the Great American Race. Jeffrey Earnhardt made his Daytona 500 debut and drove the number 33 Starter Chevrolet into the top 10 for multiple laps during the limited time that the yellow lights were dim. The day marked the first time for the younger Earnhardt and the first time for two Earnhardt’s competing in the 500 since the passing of Jeffrey’s grandfather in 2001. “It’s different for me versus my uncle” referring to the sports most popular driver for the past 14 years. “Dale Jr. is calm and has a lot of success under his belt. I’m sure he had some butterflies coming back after last years layoff but for me it’s pretty different” said Jeffrey. “We’re a smaller team with limited funds so every time I put on the helmet I know we’re going to have to battle for every spot. This car had the ECR motor so once we remedied the issue with the rear shock the car took off. I saw lots of guys staying back but Joe Falk is a racer and he’s not fond of dragging ass on purpose. He asked me if I came to race or ride and at that point we let the car do what it was capable of.”

The race had lots of yellow flags waiving and it wasn’t long before cars were headed behind the wall. Dale Jr. departed early and left one Earnhardt on the track until his number came up with a wreck during Stage 3. “We were running in file and evidently the cars in front signaled that they were pitting but the pace didn’t slow and I was coming around the turn when they waived. We had minimal damage but the car lost water and ended our day.”

Earnhardt came in 26th after starting 32nd. “We’re headed to Atlanta and looking forward to making progress during the season. The big push now is to find sponsors to improve our competitiveness. So much depends on the funding to improve your position on the track. We have some things in the works and with the addition of new sponsors we can move the 33 car up in the standings.” 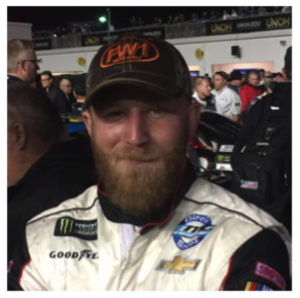 Races are available during the 2017 season with primary and associate partners wanted. The next race is the Folds Of Honor QuikTrip 500 at Atlanta Motor Speedway Sunday March 5th at 2:30 PM on FOX.