27 May 2018 – Charlotte, NC.  Fourth generation Monster Energy Nascar Cup Series driver Jeffrey Earnhardt will be piloting the Premium Motorsports number 55 Chevrolet during this Memorial Day weekends running of the Coca-Cola 600 at Charlotte Motor Speedway.  Earnhardts sponsors include a who’s who of veteran owned and veteran supporting partners including Nine Line Apparel & Black Rifle Coffee.  The car honors 617 American service members that paid the ultimate sacrifice for our nation and highlights the foundation Angels of America’s Fallen.  This organization directs charitable donations towards the families of fallen service members.
“I’m really excited to get back behind the wheel with a new team and new sponsor partners that share my values and appreciation for our military and their families” said Earnhardt.  “The Coca-Cola 600 is a flagship race during the NASCAR season and with it being Memorial Day weekend I can’t think of any better way to honor our military than the way we’re doing it.  Being able to give something to the families of our fallen service members is very rewarding and very humbling.  I’m thankful to everyone that made this happen.”
This will be Earnhardts first race since departing the 00 team earlier in the 2018 season.  “We spoke with team owner Jay Robinson and manager Tommy Baldwin and there was definitely a like mindedness” commented Earnhardt.  “I understand the dynamics of a smaller team and appreciate them looking to maximize the opportunity.  I think we’ll run well against the teams of similar size and I can’t wait to get the race started.”
The Coca-Cola 600 will be televised on Fox beginning at 6pm. 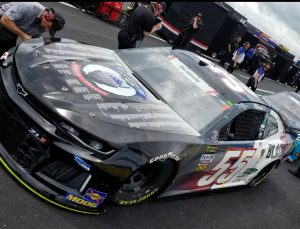 « Jeffrey Earnhardt Appearance Update:
NASCAR driver honors military by helping raise thousands for children of fallen servicemembers »
info@jeffreyearnhardt.com
Like Us On Follow Us On