Daytona, Fl – Daytona International Speedway was full of excitement and emotion for the Earnhardt driver competing in this years Coke Zero Sugar 400.  Jeffrey Earnhardt was piloting the number 7 Nine Line Apparel – Xtreme Concepts Chevrolet Camaro owned by Premium Mororsports and with a small army of veteran VIP supporters cheering him on, he was not about to let them down.

“This weekend was really special for all of us” said an enthusiastic Earnhardt.  “We began the weekend meeting some incredible Vets and I-K9 provided them with service dogs and then went on to have the best finish so far in my Cup starts.” Earnhardt had to qualify to make the race since 41 cars entered the event.  Jeffrey said, “I was nervous for sure but once I got rolling I felt the car would deliver and we made the race.  That was a huge relief.”

Earnhardt started 34th in what would be a challenging race.  Throughout the wreck filled race Jeffrey made some incredible moves to avoid major damage and put himself in a position to be part of the final restart.  “We had a penalty that put us a lap down but we kept digging and when that final caution happened we got back onto the lead lap and were running top ten.” Earnhardt pushed hard and when the checkered flag waived he brought home his best MENCS 11th place finish.

“That was by far one of the best experiences I’ve had.  Our sponsors are outstanding, the team was firing on all cylinders and I could see everything great clarity.  It was just all things coming together to make for a great weekend.”

Earnhardt is making plans for his next race and will be announcing news shortly. 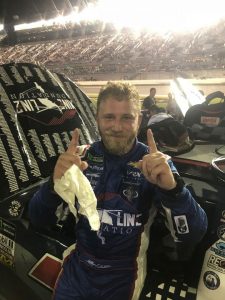