Email
12 September 2020 – Richmond, VA. Jeffrey Earnhardt and the JD Motorsports with Gary Keller race team headed to Richmond International Raceway for a night & day double header.  Earnhardt’s Zero Chevrolet is paying tribute to the victims of 9/11 and the weekend has special meaning to Jeffrey and team.  “Johnny decided to decorate all of his cars as a tribute to 9/11 victims and the heroes of that day and that has a lot of gravity” commented Jeffrey.  “Racing these cars is not cheap and to have Johnny do something like this is pretty amazing and honorable.  I want to do everything I can to compete and be successful in their memory.” 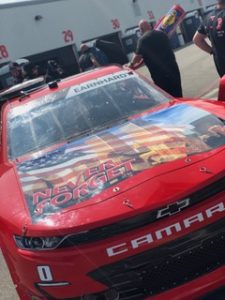 During the Friday night race under the lights, Earnhardt was passing the field and making his way forward but needed more front drive.  He communicated the issue and the team scheduled a pit to make an adjustment.  Upon returning to the track the results of the adjustment were too drastic and the team was forced to pit a second time which caused the Zero to lose position.  The team continued to battle through the evening with long green flag runs and Earnhardt navigated his way from the back to p21 over the course of the next hour.  A glance at the speeds demonstrated that the team had in fact found speed and Jeffrey was running just a bit behind the leaders speed.  When the checkered flag waived Earnhardt finished in p24. 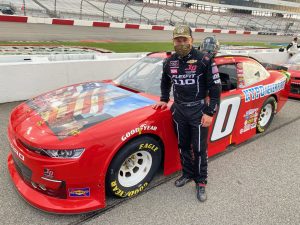 That sets the table for a promising start to the Saturday afternoon race.  The forecast is for similar track conditions to the previous nights race so the team is optimistic that they can build on the late race progress.  Tune in at 2pm EST on NBCSN and live on MRN radio
« Up Next! Daytona Road Course
511Auction.com and Food City Team Up to Sponsor Earnhardt at Bristol »
info@jeffreyearnhardt.com
Like Us On Follow Us On